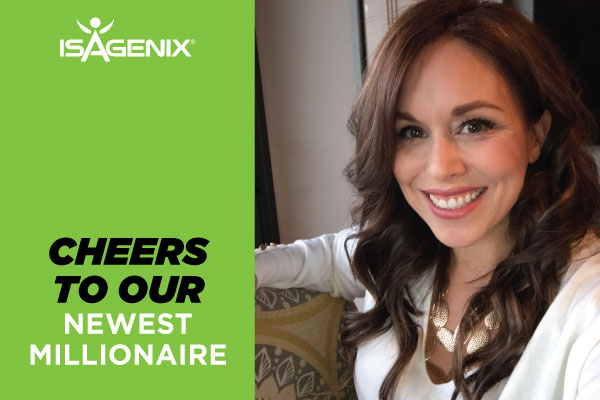 For Erica Fetterolf, years of crippling anxiety, financial hardships, workaholic hours, missed family time, and drinking a 2-liter bottle of Mountain Dew daily have been replaced by financial stability, a strong relationship with her daughter, a recent engagement, summer vacations, and a whole lot of helping others.

“I had so much stress for so many years,” she said.

Ready for change, Erica was led to Isagenix following one of her other marketing company events in January 2013. Two friends – Lisa Maciel and Gina Gillen – confided that they were using the products with another mutual friend from their previous company, Cyndi Walter. Given her friends’ testimonials for the products and calculating the compensation structure, Erica quickly did the math.

The next month, she signed up along with her two good friends, Kelly Heimbach and Linda Mery, and has since surpassed her own ambitious goals in the ensuing years to become an Isagenix Millionaire.*

Erica loves that she can use Zoom and Facebook from anywhere in the world to connect with teammates and prospective Customers at Isagenix.

She still attends the annual Celebration and New Year Kick Off events, along with a couple of Isagenix University events. She listens to every podcast and almost never reaches out to someone unless they reach out to her first.

She also set up a “one-one-one” guideline for working with prospects: She responds to anyone who reaches out within one day and then one week later if she doesn’t receive a response, followed by once per month thereafter.

“I am relentless with follow-ups,” she said. “I’ve had some people take 20 or 30 follow-ups before they’re ready, and most of them have said thanks for not giving up on me.”

She also coaches and connects with her team members in groups, roughly 10 at a time, to help create a strong team atmosphere and encourage collaboration.

“Just having the past experiences with direct sales companies, I know the value in building quickly to create momentum and how important personal development is to coach your team and constantly follow up,” she said. “Build belief in team members to help them build belief in themselves.”

Thanks to her efforts, work ethic, and technology, she now takes a step back from coaching each summer to travel and spend more time with her daughter. Last year, they went to Costa Rica. This spring, she recently became engaged to Matt Zinman and is excited to take Greta to Australia this summer.

This newfound success and happiness also inspires her philanthropic side. Erica donates to charitable causes, such as Make-A-Wish®, at every Isagenix event she attends. She also earmarks a portion of her monthly earnings for a rotating charity that’s decided by her team when she conducts Facebook Live webinars. In 2017, her goal is $25,000 in charitable contributions.

*An Isagenix Millionaire is an Independent Associate to whom Isagenix has paid a gross total of $1 million or more since joining Isagenix. Earnings reflect gross amounts that do not include any business expenses. Earning levels or income statements (including claims such as the ability to quit a job or stay at home or portrayals of luxury lifestyles) for the Isagenix Independent Associates discussed here exceed the average results achieved by all Associates during the same time period, are not necessarily representative of the success or compensation that any particular Associate will receive, and should not be construed as typical or average. The ability to earn income under the Isagenix Team Compensation Plan depends on many factors including an individual Associate’s business, social, and sales skills; personal ambition and activity; availability of time and financial resources; and access to a large network of family, friends, and business contacts. Isagenix cannot and does not guarantee any particular level of earnings. Even Associates who dedicate a significant amount of time, effort, and personal funds may not achieve a meaningful level of success. For average earnings of Independent Associates, refer to the Isagenix Earnings Disclosure Statement at IsagenixEarnings.com.