Finding a New Path: From Warehouse to Financial Freedom

Congratulations to Isagenix Millionaire No. 167! 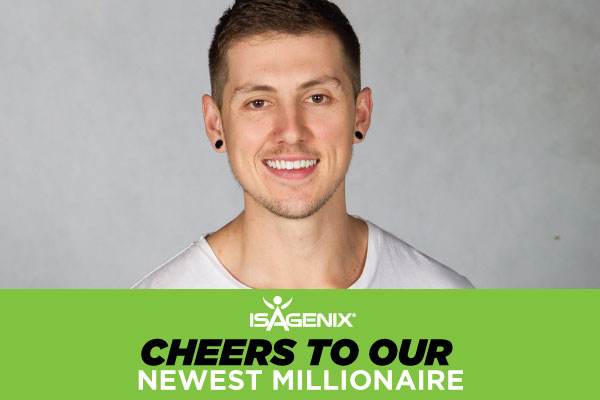 A Change of Plans

Chasing his dream of playing basketball professionally three years ago, Jackson P. thought his life was planned out. Pursuing college basketball success in Iowa, he envisioned himself going back home to Australia to represent his country in the sport he loved. Fate had a different plan, however.

Four months before his return, ill fortune set Jackson on what would ultimately be a different path entirely. “A few months before I was set to graduate and come home for good, my lower back and sciatic nerves started to flare up and get progressively worse over time,” recalls Jackson. “By the time I flew home, I couldn’t stand up straight or be on my feet for more than a few minutes at a time before needing to lie down.”

The diagnosis was that Jackson had ruptured a disc, which was constantly leaking fluid onto his sciatic nerves. Months of acupuncture, massage, chiropractic sessions, and other therapy did little to alleviate the pain, so Jackson was forced to face his fear of invasive surgery.

“I didn’t have health insurance so I was told I’d have to wait a year to have the surgery covered. I couldn’t bear to wait another month, let alone a year, so I borrowed over $30,000 and paid for the surgery in cash so that I could get on with my life.” Fortunately, the disc was replaced with a titanium one, and Jackson hasn’t had a problem since.

While surgery fixed Jackson’s injury, what he now had on his hands was considerable debt and little in the way of an income to support himself. “When I was up and moving again, my first thought was how I was going to pay off my debts. That was my priority. I’ve always been into sport and fitness, so I thought about giving personal training a go. I soon found out it wasn’t for me and got a job as a picker and packer at a warehouse while I figured out what I was going to do.”

Ready for a New Life

When Jackson was first introduced to Isagenix, he shut the idea down, saying he “just wasn’t ready.” A few years later, he was reintroduced to Isagenix in August 2013, and this time, everything felt right. “I looked at what was being offered and got involved then and there. I didn’t have the money to get started, so I put it on my credit card and told myself that I would either make my money back or ask for my money back. I had nothing to lose because of the Isagenix 30-day guarantee.”

Before long, Jackson began to see that Isagenix could be a real solution for people looking to transform their energy, health, and physique.

After experiencing the benefits of the products, and skimming the surface of network marketing as a profession, Jackson, now 8-Star Platinum, 6-Star Crystal Executive, decided to attend University in Action in Sydney. At that point, everything changed for Jackson.

“I walked out of David Wood’s training finally understanding what that Value/President’s Pak could do for me. It was so much more than just health products. In that box was a vehicle to create whatever I wanted and help whoever I wanted,” Jackson remembers.

Lynn Hagedorn’s tips for business building shifted his approach to growing his team and meeting Erik Coover at Celebration for the first time gave Jackson a stronger purpose. “I fell in love with his heart and his vision for young people everywhere. I’ve been aligned with Erik and the START movement ever since. There’s no accomplishment in my life I’m more proud of than being an ambassador for #STARTYourLife.”

Now an Isagenix Millionaire,* Jackson has no plans to stop sharing the opportunity that has changed his life. “I’m not the same person I was when I first said yes to Isagenix. Before Isagenix, I would have told you that personal development was something stupid that didn’t do much more than help people sleep better at night. Isagenix has really helped me grow and understand contribution and giving back. I’d never contributed to anything in my life before Isagenix,” admits Jackson. “I thought I was a victim. I didn’t have time or money to donate or contribute. Now contribution and impact are what wake me up in the morning. Not an alarm clock.”

“For me, when I became a six-figure income earner that really turned my life upside down.** That was something I thought I would never experience,” says Jackson. “So, seven figures…I don’t think I’m capable of computing that just yet! The first thought that came to mind was what an awesome excuse to throw one amazing party for everyone!”

*Isagenix Millionaires are defined as Isagenix Associates who have cumulatively earned $1 million or more with Isagenix.